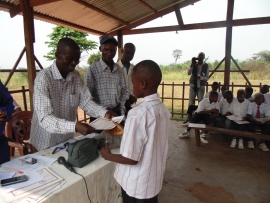 The Diamond Development Initiative, which works to formalize the Artisanal and Small-scale mining (ASM) sector and improve the lives and working conditions of artisanal and small-scale miners, their families and communities, honored 110 children from remote mining communities in the Democratic Republic of Congo that attended DDI's mobile schooling program. They have completed their remedial primary education program, passed their state exams, and are now participating in their local graduation ceremony. The goal of the mobile schooling program is to provide access to remedial education to children in diamond mining communities in order to prevent them from working in the mines and allow them the opportunity to reintegrate the formal schooling system. The two-year curriculum provides children the opportunity to acquire essential literacy and numeracy skills and grade-level general knowledge with the goal of passing the national exam.

DDI has been operating four mobile schools with six classrooms, for a total of 121 students. The schools are sponsored by Brilliant Earth (one school in Kasaï Occidental), Diamond Empowerment Fund (one school in Kasaï Occidental) and Signet Jewellers (two schools in Kasaï Oriental). Mpoyi Nsanza is among the proud graduates. Nsanza abandoned school at the age of 10 when her family moved to the mining community of Tshifumba. Because there was no school in the village, she followed her father to the diamond mine to work. Two years later, she was selected for the mobile school. “At the beginning of the program it was hard for me to adapt because it was intense, but I was motivated by the meals that were offered twice a day and I was afraid of the mining work because it was much harder than attending school.” After 18 months of remedial training, Nsanza passed the state exams as best female student. Now she says she has two wishes: to become a mining engineer, and for education to be available to all the other children in her community.

Dorothée Gizenga, Executive Director of DDI: “DDI has responded to a pressing need, but does not have the resources to meet all the schooling requirements in artisanal mining communities. All children, from elementary and secondary levels, should be in school.” For this reason, along with accompanying the current cohort of primary graduates through to the end of secondary school, DDI is working to engage local and international partners, and seek a commitment on the part of local and national governments, to provide all children in mining communities with basic education.