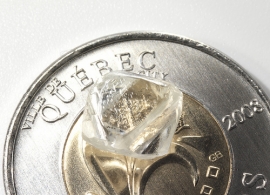 Despite ongoing breakage issues during processing, Canadian junior miner Stornoway Diamond experienced an uptick in prices for rough diamonds from its Quebec mine during the second quarter of 2017. At its two tenders held in Antwerp during the period, Stornoway achieved average diamond pricing of US$87 per carat, compared to US$81 per carat in the first quarter. “We are particularly encouraged by the steady increase in pricing for Renard diamonds as the market familiarises itself with our production,” said company President and CEO Matt Manson. The improved prices helped the company to earn revenues of $32.5 million (CAD $40.9 million) from the sale of 350,159 carats in the second quarter. An additional 151,135 carats were sold subsequent to quarter end for proceeds of US$15.7 million (C$19.8 million), at an average price of US$101 per carat. Overall, pricing for Renard diamonds has increased +19% since sales began (expressed in real terms after accounting for size distribution and quality variations).

Manson adds, "Pricing continues to be impacted by high levels of diamond breakage," and subsequent to the quarter end, a program of plant modification measures aimed at reducing breakage and producing a higher quality diamond product was approved by the Board of Directors, with an expected capital cost of $22 million to be funded from existing financial resources. The company reported 417,362 carats recovered during the quarter from the processing of 512,005 tons of ore, compared to a plan of 486,591 carats from 513,000 tons, due to the processing of lower grade ore (at 82 cpht compared to a plan of 95 cpht). During the course of the quarter, Stornoway achieved the milestone of one million carats of diamonds produced and attained nameplate processing capacity, on schedule.