Gem Diamonds First Half Revenue Down, Offer Received for Botswana Mine 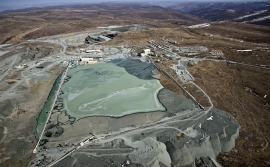 Gem Diamonds CEO Clifford Elphick called the improvement in the recovery of +100 carat diamonds at Letšeng (4 in the Period, 1 just after) “encouraging with the US dollar per carat achieved trending positively at US$1,779, up 20% from US$1,480 in H2 2016.” He continues saying "the updated life of mine plan was implemented during the Period with the objective of reducing waste tons mined and improve near term cash flows, and mining progressed well against this plan during the Period.” Furthermore, they reported an average price of US$2,385 per carat at the recent tender which closed on 19 July 2017 in Antwerp (this average price per carat includes the lower-value smaller commercial production, included at an estimated value, which will be sold in the next tender in September).

The Ghaghoo mine was placed on “care and maintenance” during the Period, which according to the miner “will result in further cost optimization during the remainder of the year.” In the meantime, an offer to acquire 100% of the Ghaghoo asset was received and shareholders are advised that the Board is considering the offer. In an effort to continue reducing costs, measures were taken for cutting an additional $15m and will be implemented as from October 2017.