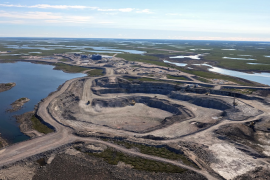 Mountain Province Diamonds - a 49% participant with De Beers Canada in the Gahcho Kué diamond mine located in Canada’s Northwest Territories - reports strong interest in Antwerp for Gahcho Kué Diamonds in Q2 2017 (ended June 30, 2017), despite a challenging rough diamond market. For the three months of Q2, MPD reported a net income of US$6 million (C$7.6 million) or US$0.39 (C$0.05) per share. Their recovered average grade of grade of approximately 1.97 carats/ton is 20% above budget for the six months ended June 30, 2017, providing a strong revenue-per-ton of ore mined despite the difficulty of obtaining strong prices.

MPD conducted two sales through its broker in Antwerp, Belgium, during the quarter of which only the second sale, which took place in June, was reported in the statement of comprehensive income. Sales attributed to their Q2 financial statement totaled 215,00 carats at an average of US$101 per carat, with earnings per carat of US$42. Q2 ended with a net income US$5.9m and comprehensive loss of US$276,000. In the six months ended June 30, 2017, they conducted five sales for a total of approximately 892,000 carats, including fancies and specials. Proceeds of approximately US$71.5 million or an average of US$80 per carat were received. Gem and near-gem diamonds for the six months ended June 30, 2017 contributed approximately 96% of the diamond sales proceeds at an average price of US$128 per carat. The remaining 4% of proceeds came from industrial diamonds at an average price of US$7 per carat. Gem and near-gem diamonds represented approximately 60% of sales by volume to June 30, 2017.

On July 20, 2017, just after the end of Q2, MPD closed its sixth and largest sale to date at an average realized price of US$72 per carat. Certain of the fancies and specials from this assortment were accelerated and sold in the fifth sale in June, and including the value of these diamonds the average realized price on the sixth sale assortment was US$87 per carat. This sale confirmed the continued strong market interest in the Gahcho Kué production, the company states, with 10.6 bids received per parcel and 83% of winning bidders being repeat customers. Participation at the sales has steadily increased in recent months. Bids per parcel (approx. 120 parcels per sale) increased from an average of 9.1 over the first three sales to 10.8 over the last three sales. MPD says there is a high level of market interest and competition for Gahcho Kué diamonds with an average of 100 companies bidding each sale.

Mountain Province Interim President and CEO David Whittle commented: “Mine operations have performed well with the declaration of commercial production at the beginning of March. Price realization remains a challenge as rough diamond markets, while showing some signs of strengthening in recent months, nonetheless continue to be under pressure and are expected to be relatively flat through the balance of the year. However, on a revenue-per-ton basis the mine has performed well, bolstered by a solid overperformance in grade as compared to original plan. The operating cost structure is also solidly in line with plan as well. Our ability to generate a 43% gross margin on mine operations in our first quarter of reported results, in spite of the challenges in the rough diamond markets, speaks well to the resiliency of the GK Mine."