ALROSA's Search for Missing Miners Continues Against Odds; Mir Mine Had Earlier Problems 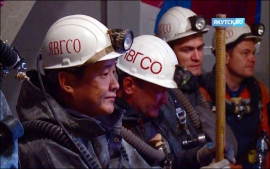 ALROSA's search for the eight missing miners at its Mir mine in Yakutia continues for the sixth day. Citing an Interfax update, Rough & Polished details the harrowing complications with the search efforts. "The water level at the Mir mine in Yakutia continues to increase, while rescue and search operation for the eight missing miners continues for the 6th day in a row. Groundwater gradually fills the mine workings. To carry out search and rescue operations more effectively, a combined teams of rescuers of the Ministry of Emergency Situations (MES) of Russia and miners of ALROSA were formed." The Siberian Times states, "Rescuers are braving 'extremely dangerous conditions' to seek miners trapped underground after flooding of the Mir diamond complex in Yakutia. Deputy head of the Emergencies Ministry Vladlen Aksyonov warned: 'There are over 40,000 tons of water above which can break through at anymoment and no-one knows when.'"

Deputy Minister of MES Vladlen Aksyonov has been working at the mine since the first day of the incident and spent five hours underground, personally assessing the safety for rescuers. "To understand what the situation is, you need to see it with your own eyes and assess the scale of destruction, the work that needs to be done, and the situation itself – whether it is safe for rescuers or unsafe. I found it necessary to personally go down and inspect the work sites. The situation is complicated – there are multiple blockages, large plugs of clay. Most excavations are completely flooded, but we continue to work on saving people," Aksyonov said. Examination of mine workings showed that the water level in the mine continues to rise, the hydrological situation is deteriorating. The site of search should be protected from water.

Auxiliary tasks, such as the functioning of mine life support systems, delivery and installation of necessary equipment, many other works are carried out directly by the specialists of the enterprise. "In a record time, several powerful pumps were installed to drain water from the mine. Usually, this work takes about a month, but in this situation, all the technical and human capabilities were mobilized. More than 50 people from 4 of our enterprises have installed pumps in 72 hours," said the president of ALROSA, Sergei Ivanov.

Problems with ALROSA's Mir mine began long ago

Meanwhile, news site Yakutia.info reports that mining at the Mir mine had already been suspended in 2012 due to non-compliance with industrial safety requirements. Earlier in the media it was reported that the construction of a drainage horizon at the depth of 210 meters in the mine was being conducted with a significant deviation from the existing project documentation. From September 5 to September 7, 2012, Rostekhnadzor (the supervisory body of the Government of Russia on ecological, technological and nuclear issues), conducted an unscheduled field inspection of the Mir mine. "As stated in the report of Rostekhnadzor, during the audit it was revealed that the works on the construction of a drainage horizon at the level of 210 meters of the mine are being conducted with significant deviation from the existing design documentation, lagging behind the construction schedule, the construction of non-project water drain schemes, the liquidation of water manifestations in the panel without project justification, non-compliance with the design specification of the installed equipment." The Lensk office of Rostekhnadzor stated that these violations pose a threat to life and health of people, and suspended the conduct of treatment (mining) works at horizons 210 and 265 meters of the Mir mine for 30 days.