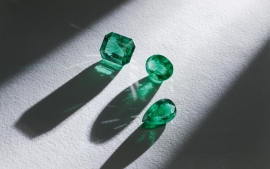 Palllinghurst Resources, following its recent takeover of Gemfields, has appointed Sean Gilbertson as new CEO for the colored gemstone miner as it commences the acquisition process. The move follows the resignation of Gemfields' non-executive directors, including that of CEO Ian Harebottle, who has held the position for the last eight years. Harebottle, as well as the resigning board members, was highly crititical of the takeover, saying it "significantly undervalued" the company. Pallinghurst’s recent acquisition of the company led to the July 28 delisting of Gemfields from AIM, the London Stock Exchange’s market for smaller companies. It is now an unlisted subsidiary of Pallinghurst, which expects to own 100 percent of the company by the end of August 2017.

Sean Gilbertson is the longest serving executive director of Gemfields and played a pivotal role in the acquisition and redevelopment of Kagem, as well as in the rebirth of Fabergé, writes Pallinghurst in its announcement. He is also the son of Pallinghurst board Chairman Brian Gilbertson. Former chief financial officer Janet Boyce has also resigned and will be replaced by David Lovett, who has served on Gemfields’ financial team since 2008.

The announcment reads, "Gemfields’ debt is currently at record levels, caused in large measure by a material drop in emerald production at Kagem and resulting in a US$54 million year-on-year decline in Kagem’s auction revenues for the year ending 30 June 2017." Nevertheless, Brian Gilbertson, Chairman of Pallinghurst commented: “Gemfields is a uniquely attractive business with strong growth potential. We intend to focus on profitability in pursuit of the vision of building the “De Beers of coloured gemstones”." Pallinghurst said in its press release that it has commenced a thorough review and analysis of Gemfields’ operations, including processes, plans, budgets and financial position. Its findings will inform an updated plan for developing the colored stone miner.