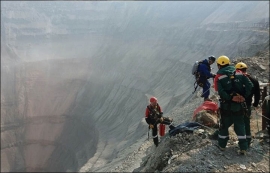 ALROSA issued the following press release this morning concerning the search for eight missing miners after a flood in the Mir mine in Yakutia: Mine rescuers teams, 60 people in each, started the morning stage of the search operation. The pace and scope of their work will depend on the weather conditions and geological situation in the open-pit mine. More than 330 people and over 30 units of equipment are involved in the search.

Seven rope access technicians have started descending down the open-pit slopes at 6:00 am. Today they are working out new ways to go to signaling drillholes. The technicians are descending according to plan. With a stable geological situation and favorable weather with no precipitation, they are planning to go 450 meters down today and reach the middle tunnel portal on the open pit’s sheer walls. The main outlets of the air holes through which rope access technicians will continue signaling to the miners trapped underground are located there. The emergency situations ministry said rescuers had already explored along tunnels stretching almost 7km and had cleared 200m of blocked tunnels. The company was also working to set up extra pumps to remove water from the huge crater that is leaking into the underground mine shafts, to ensure the rescuers’ safety.