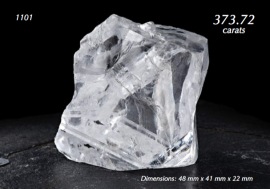 Lucara Diamond Corp. the Canadian junior diamond miner whose key asset is its 100% owned, state-of-the-art Karowe Mine in Botswana reports strong Q2 results despite a decline in mined ore volumes and carats recovered, as higher value recoveries compensated for lower grades. Q2 revenue was $79.6 million or $1,336 per carat from 62,434 carats total, which compares favorably to Q2 2016, where Lucara sold $77.7 million at $1,017 per carat from 107,801 carats total (figures exclude the 2016 sale of the 813-carat Constellation diamond for $63.1 million, for a more accurate comparison). They held their first Exceptional Stone Tender of 2017 on May 11, which achieved proceeds of $54.8 million or $31,010 per carat. For the six months ended June 30, Lucara earned $852 per carat. In Q1 the company saw disappointing revenues of $26.1 million or $405 per carat due to a lower volume of carats being sold and a decrease in the carat weight of specials sold. Thus, Lucara clearly bounced back in Q2, recovering 113 specials (+10.8 carats) which equated to 5.9% weight percentage of recovered carats, which they say was in line with expectations (Q2 2016: 4.6%). Lucara also declared a quarterly dividend of CDN 2.5 cents, payable on September 14, 2017.

Lucara mined less ore than planned as a result of their mining contractor, Aveng Moolmans, experiencing equipment availability issues during the beginning of the quarter. Mining activity therefore focused on waste material movement that is on schedule to ensure increased flexibility for mining south lobe ore in the future. They further note that while ore mined was lower than forecast, processed volumes were largely on forecast as ex-pit ore feed was replaced with south lobe stockpile material. Due to the south lobe being of lower grade when compared to the centre and north lobes, but of higher value, carats recovered to date were lower than forecast, however they continue to maintain their revenue forecast due to the processing of higher value south lobe ore. Lucara continues to forecast revenue between $200 million and $220 million for the year ending December 31, 2017. This excludes the potential sale of Lesedi La Rona currently held in inventory. Waste mining remains on schedule with a forecast of between 17-18 million tons mined for the full year. A reduction in ore mined has led to a revised forecast from 2.4-2.7 million tons to 1.8-2.0 million tons.

They continue to forecast tons processed at between 2.4-2.7 million tons. Reduced mined ore volumes offset by increased volumes from the lower grade south lobe stockpile has reduced forecast of carats recovered to between 265,000-285,0000 carats (previous guidance 290,000-310,000) and carats sold to 260,000-275,000 carats (previous guidance 290,000-310,000). Revenue guidance is maintained at between $200 to $220 million, however, as south lobe ore generally returns larger, higher value diamonds contributing to higher overall rock value. Revenue guidance forecast does carry increased risk based on the challenge in predicting the overall timing of the recovery of these large, high value stones.

The company's Q2 2017 operating margins were $1,089 per carat or 82%, which is largely due to their first exceptional stone tender in 201. Year to date revenue was $105.7 million or $852 per carat achieving a 73% operating margin. William Lamb, President and Chief Executive Officer commented, "Sales in the First Half achieved extremely strong prices and with our focus on cost control, the Karowe mine continues to deliver strong operating margins. We have worked with our new mine contractor to improve performance during Q2 and Q3, and our mining department is now achieving our productivity targets. Our focus on the process plant is to complete the capital projects, further enhancing diamond recovery by the end of Q3 this year. This will place the Karowe mine in an even stronger position to maximize value from the recovery and sale of diamonds from the high value south lobe."