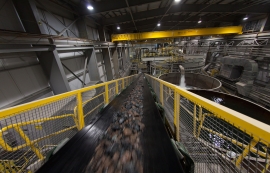 Mountain Province Diamonds, a Canadian junior miner and 49% participant with De Beers Canada in the Gahcho Kué diamond mine located in Canada’s Northwest Territories, sold 290,000 carats of rough diamonds valued at $20.9 million at its sixth tender sale of the year in July. This is slightly less than they achieved ($21.1m) from 222,000 carats sold in June, but the results are somewhat misleading as the results from the fifth and sixth sales are impacted in part by the inclusion in the fifth sale of a high-value selection of fancies and specials won by the company, which were otherwise scheduled for inclusion in the sixth sale. Including these high-value diamonds, the value realized per carat in the sixth sale was US$87. The value per carat as reported, however, is only $72 per carat. Mountain Province and De Beers bid against one another for the right to sell the high-value stones mined each period by the joint venture.

The Company’s sixth sale represents the highest volume sale to date and cumulative sales at tender now exceed 1.18 million carats. Competitive bidding and strong prices were realized on the fancies and specials and high-end parcels, and prices realized on the remainder of the lots were in line with expectations, according to the company. Tender performance measures remain healthy with a high level of interest from returning customers. Reid Mackie, the Company’s Vice President Diamond Marketing, said, “Following on from a very strong June sale, the July tender was well attended and bidding performance remains high.  Repeat customers won 83% of lots, consolidating our view that the rough market is now fully engaged with the Gahcho Kué product and its positive performance at manufacturing.”

David Whittle, the Company’s Interim President and Chief Executive Officer, adds, “The diamonds sold in this sixth sale primarily originate from the April production month, and the attributed value per tonne for the month as realized from the sale was C$225 (US$179). This is the highest monthly value per tonne we have achieved to date, and reflects the particularly strong recovered grade for the April production.  It is encouraging to see these positive trends through the initial months of our first full year of production.”