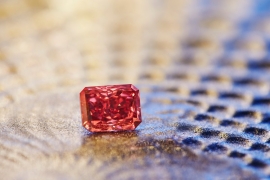 Rio Tinto Copper and Diamonds chief executive Arnaud Soirat said, “We are delighted to announce this historic diamond at our Tender preview, a testament to the unique Argyle ore-body that continues to produce the world’s rarest gems.” Over the Tender’s 33-year history, less than 20 carats of Fancy Red certified diamonds have been sold. This year’s Tender features 58 diamonds weighing a total of 49.39 carats. It includes four fancy red diamonds, four Purplish Red diamonds, two Violet diamonds and one Blue diamond. The 2017 Argyle Pink Diamonds Tender will be exhibited in New York, Hong Kong and Perth, with bids to close on October 11 2017.

Yesterday's article in The New York Times, "How Much for That Fancy Red Diamond? It’s Kind of a Secret", discusses the pricing of fancy colored diamonds in general and Rio Tinto's reds in particular, a market that has seen prices rising by double-digit percentages in recent years. About the dynamics of that pricing, Arnaud Soirat, the chief executive of Rio Tinto’s copper and diamond group said, “It’s quite confidential.” As Micah Maidenberg writes for The NYT, "Welcome to the exclusive world of the colored diamond trade, a market where the buyer pool is slim, the supply is constricted and a carat can fetch $1 million or more ... Rio Tinto invites a select few collectors, wealthy people, dealers and others to submit sealed bids for the stones in the batch. It is a selling process that has few peers in opaqueness. Besides Rio Tinto, no one knows how much bidders offer for the stones, and the company does not report how much the winning bidders pay."

In the Argyle mine’s 33-year history, just 23 other fancy reds have been recovered. David Shara, owner of Optimum Diamonds in New York who has been trading in naturally colored diamonds for about 15 years, siad, “It’s the ultimate prize,” he said. “It’s literally the ultimate prize.” Olya Linde, a partner in the Moscow office of the consultants Bain & Company, told Maidenberg that colored diamonds were “governed by a different logic” from the more typical clear diamonds. The market for them, she said, is more similar to how fine art is bought and sold. The record auction price for a fancy red diamond is $5 million, paid three years ago in Hong Kong. Rio Tinto's Argyle mine -  which produces 90 percent of all naturally colored pink diamonds - is scheduled to close in 2021. When it does, the supply of naturally colored diamonds will probably become even more scarce. Asked if this would increase prices even further, Mr. Soirat commented, “It’s a market that follows the rules of demand and supply.”