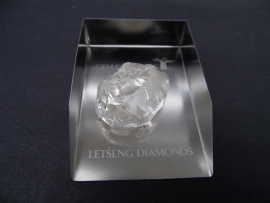 Gem Diamonds has released its H1 trading update showing improvement in the discovery of highly valuable diamonds from Letšeng mine in Lesotho, as well as a strong uptick in sales prices for its large stones, but are investors convinced that real recovery is on the horizon? After a year of declining large diamond recoveries (5) and prices (-26%), the company has recovered five +100 carat diamonds since the end of March alone (4 in reporting period, 1 just after) and has seen its pricing increase to an average of US$1,779 per carat for the period, up 20% from US$1,480 per carat in H2 2016. Furthermore, they report an average price of US$2,385 per carat at the recent tender which closed on 19 July 2017 in Antwerp (this average price per carat includes the lower-value smaller commercial production, included at an estimated value, which will be sold in the next tender in September).

Additional highlights of the first half of 2017 include the recovery of exceptional 98.42 and 80.58 carat D-color Type IIa diamonds, with 18 diamonds sold for more than US$1.0 million each, generating revenue of US$37.0 million, and the recovery of an exceptional 126.75 carat D-colour Type IIa diamond (pictured) after the period ended. Overall, they recovered 50,478 carats during the period - a 1% decline from 50,825 carats recovered in H2 2016 - at a slightly improved grade of 1.59cpht. Still, this grade is lower as against an expected reserve grade of 1.63 cpht, "mainly due to the underperformance of the Main pipe contact material and internal changes in the geology of this pipe." The company says, "A core drilling program will be implemented during the second half of the year to improve confidence in the geology at depth, including volume, grade, and revenue inputs of the resource." Fewer tons of ore (-4%) were treated as well, "due to reduced plant availability and downtime associated with the installation and commissioning of the split front-ends for Plants 1 and 2."

Gem Diamonds CEO Clifford Elphick called the improvement in the recovery of +100 carat diamonds at Letšeng "encouraging", nevertheless, net debt rose to $14.2m from $10.8m during the quarter and the company said it had launched a cost cutting review. Thus far investors do not seem quite as encouraged. The trading update has sparked an early uptick on the London stock market, albeit from an annual low point of 80 GBpence. Gem's share price has fallen approximately 38% from an August 2016 high of 135 GBp. Still, analysts at Liberum comment, “Given the continued improvement in realised pricing in the first tender of the second half and that management are hoping to hit the bottom end of guidance… the company could return to being cash generative.”