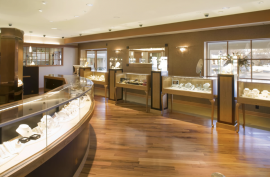 Statistics from the jewelers Board of Trade (JBT) show that the trend of increasing of business closures in the North American jewelry industry continued in the second quarter of 2017, but at a slower pace than previously, reports JCK's Rob Bates. In fact, there were 48% fewer closures in Q2 2017 than Q2 2016, from 475 to to 245 closures in the period. As Bates clarifes though, "the consolidation trend hasn’t totally reversed itself: The number of jewelry companies is still shrinking. In June, the JBT recorded 27,706 businesses. That’s down from last year’s 29,439." Indeed, as JBT president and CEO Anthony Capuano states, “The trend has not changed: We are seeing fewer jewelry companies. We are dealing with an aging population of store owners. I don’t think any major drivers of the trend have changed.” He notes that the rate of decline also slowed in the first quarter. “The rate of decline has now abated for two quarters,” he says. “But it’s too early to say it’s a trend.”