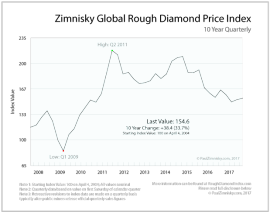 Independent analyst and consultant on diamonds and the mining industry, and publisher of the Zimnisky Global Rough Diamond Price Index, Paul Zimnisky has published an in-depth article charting the vicissitudes of rough diamond prices on a quarterly basis for the past 10 years - since the onset of the global financial crisis. We consider this a must-read for anyone seeking to gain insights into the diamond industry as a whole and rough supply-side dynamics in particular. From Q4 2007 when rough diamond prices were on a seemingly endless rise to a crash in Q1 2009 where they hit a 10-year low, to a new apex in Q2 2011 and everything in-between through Q3 2017. Despite recent volatility and changes to the entire dynamics of the contemporary trade, he concludes: "The inherent allure of diamonds has existed for centuries, and the resilient diamond industry has an impressive track record of survival."

Zimnisky writes: "This year marks 10 years since the onset of the global financial crisis. In 2007 the first signs of a collapsing sub-prime mortgage bubble in the U.S. were seen, although rough diamond prices were not impacted until the fall of 2008, just shortly after achieving record high prices in summer 2008. As the global economy crashed, rough prices bottomed out in the beginning of 2009, congruent with the U.S. stock market. Two years later new all-time highs were made in the summer of 2011, highs that have yet to be retested.

Over the last decade the diamond industry has been wrought by historically high volatility. A surge in demand for diamonds from the economic and social liberation in China along with other emerging economies that consequentially benefited, was followed with overt speculation by industry players that left the industry oversupplied when the growth tempered. Banks lending to the industry consequently reined in liquidity, some leaving the business altogether, further exacerbating the situation.

The upstream segment of the industry responded by curtailing supply, reducing prices, implementing a marketing campaign and increasing transparency attempting to restore profitability and confidence to its customers and their lenders. The proactive response by the miners showed signs of success as industry-wide inventories returned to more normal levels and supply/demand balanced. However, just as the recovery was underway, India demonetized its highest denomination bank notes, directly impacting the largest base of manufacturers in the industry.

Today the diamond industry continues to navigate internal challenges, such as the advancement of lab-created alternatives, with an arguably more challenging structural backdrop of generational shifts in consumer preferences. However, the inherent allure of diamonds has existed for centuries, and the resilient diamond industry has an impressive track record of survival."