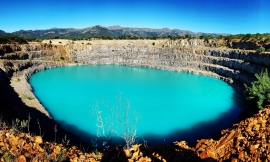 Just days after announcing it had identified a group 2 kimberlite pipe at the Ontevreden licence held by Vutomi in an area known for its high-grade diamonds, AIM and BSE listed explorer Botswana Diamonds (BOD) has announced it has been granted a prospecting licence over an additional 1,000 hectares at its Vutomi joint venture in South Africa. Geophysics studies undertaken in the area, which is immediately east of and contiguous to the company’s flagship Frischgewaagt project, indicate that the kimberlite dyke/pipe system being studied extended into the adjacent property, the firm said. The combined area of the two properties covers over 2,700 hectares.

John Teeling, Chairman, commented, "Geology does not follow licence boundaries.  One of the first things you do if you have promising exploration results is to secure adjacent ground.  Initial results are encouraging, but we do not yet know where the richest mineralisation will be confirmed.  Work so far strongly indicates that the system containing diamonds extends eastwards, adjacent to our Frischgewaagt property.  We believe that the diamond-bearing dyke stretches at least 10 km.  We sought and obtained a prospecting licence over this promising ground as a matter of urgency. The drilling programme starting in weeks will be extended into this area."