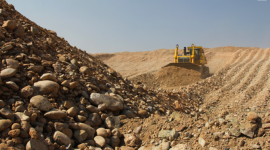 Canadian junior miner Rockwell Diamonds, which focuses on developing alluvial diamond deposits in South Africa and is currently in business rescue avoid liquidation, is struggling to stay afloat and to bring its new Wouterspan WPC) project into full production, all the while bleeding cash. And its CEO, Tjaart Willemse, brought in to turn the company around, has resigned. Rockwell's latest quarterly results reveal the challenging situation the miner is facing, as it reported no formal results of operations in the first quarter as all mining activity, processing, sales and costs for sales are accounted for as commissioning costs, and capitalised to property, plant and equipment. In Q1 ended May 31, 2017, Rockwell showed current liabilities of US$15m (C$19m) against current assets of US$3.38m (C$4.26m), while the company’s cash dwindled to US$226,075 (C$285,000) from US$1.35m (C$1.7m) in the May quarter a year earlier.

While no revenues were reported, the company recovered a total of 359 carats from the WPC project, with 8 stones larger than 10 carats, for an average price of US$ 2,599 per carat. Volumes mined from the WPC ramp-up operation during the quarter totalled 166,328 cubic meters of alluvial gravels. They note that all phases of the WPC plant have now been commissioned, however some bottlenecks and design shortcomings have been identified and work is ongoing to address these. "Rockwell experienced a total comprehensive loss of $2.7 million for the quarter, which was primarily driven by no completed operations being conducted during the period, resulting in very few diamonds recovered to cover operational costs and overheads," the statement reads.

They add that, "The business rescue process in respect of the three South African subsidiaries (Rockwell Resources RSA Pty Limited, HC van Wyk Diamonds Limited and Saxendrift Mine Pty Limited) is ongoing, with the objective to return the companies to solvency. During this process all claims and liquidation orders are stayed, allowing the ramp-up of the WPC operation on a legally protected basis. The appointed business rescue practitioners are actively working alongside the Companies’ management to prepare a business rescue plan which will deal with all claims against the subsidiaries, to be published on or before September 30, 2017." Mr. Stephen Le Roux has been employed to lead Rockwell’s Middle Orange River operations.