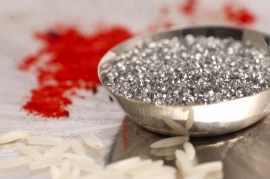 Production at the Diavik Mine in Canada's NWT, in which Rio Tinto holds a 60% stake, increased 18% in Q2 compared to the same quarter a year earlier, delivering 1.2 million carats compared to 948,000 last year. First-half production, at 2.3 million carats, ended 8% higher than the 2.1 million carats produced in the first half of 2016. Rio Tinto attributes the increase to higher processed volumes as well as higher recovered grades. Diamond production guidance for 2017 remains unchanged at 19 to 24 million carats.

Yesterday's news concerning the sale of Dominion Diamond - Rio Tinto's 40% partner at Diavik - to The Washington Companies does not appear to be an immediate threat to opertions there, as Lawrence R. Simkins, President of Washington, stated, “We are excited to work with their team to extend the mine life of the Ekati mine and continue partnering with Rio Tinto in the operation of the Diavik mine."