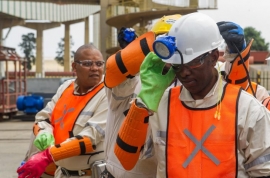 South Africa has suspended implementation of a contentious and highly criticized mining ownership law pending a judgement in an urgent interdict application by mining companies, the country’s Chamber of Mines said. South African mineral resources minister, Mosebenzi Zwane, has agreed not to implement the current redraft of the Mining Charter Three pending judgement of an urgent interdict brought by the Chamber of Mines, a temporary victory for the miners. The Chamber can set the urgent interdict application down for hearing on 48 hours notice should the Department of Mineral Resources (DMR) or minister breach the understanding. The parties have asked the Deputy Judge President (DJP) of the High Court to allocate a hearing date in September 2017. The Chamber of Mines, which represents the majority of the miners operating in South Africa, had applied in July for an urgent high court injunction to prevent the implementation of the new rules.

The drafting of a third Mining Charter was published on June 15, laying down a number of provisions that had not been negotiated with the mining sector. Among the changes introduced, it increased the minimum black ownership requirement for local mines to 30%, from the previous 26%, and set a 12-month deadline for them to comply with the new rules. It also established that mining companies must pay 1% of turnover to their black empowerment partners, which if in effect last year it would have consumed 95% of the 6 billion rand (about $460 million at today's rates) paid in total dividends by the industry last year, the chamber said. The revised mining charter not only raised costs and imposed new levies to fund community development, but it has also put at risk some major deals recently announcement.

According to Martin Creamer of Mining Weekly, Chamber CEO Roger Baxter described the arrangement as satisfactory for the chamber and the industry, whose primary objective through the interdict application remains to ensure that the DMR’s charter does not come into effect. The Chamber of Mines described the Mining Charter as “… a most egregious case of regulatory overreach” – a comment on certain aspect of the document that were “so obviously beyond the powers of the Minister [of mines, Mosebenzi Zwane]” as he was attempting to exercise powers that “… reside exclusively with Parliament”. The chamber earlier warned that strangulation of the mining sector risks the stifling of the entire South African economy, and commentators have been unanimous in their condemnation.

The Chamber added the Charter is “… so confusing and confused, and so contradictory in its core provisions, that not only are the mining companies who are supposedly obliged to comply with the 2017 Charter perplexed as to what they are required to do, but legal experts themselves are confused and find themselves unable to provide clear advice to their mining and investment clients as to the meaning and effect of the 2017 Charter.” Zwane said last week that his department was prepared to consult with mining companies on the charter, but doubted whether any of its provisions would be altered, to the irritation of the Chamber, which had not been consulted. Last month, South Africa’s Chamber of Mines Vice President Steve Phiri described the Revised Mining Charter as the “last nail in the coffin” for the mining industry.