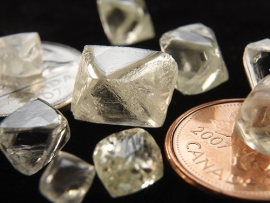 Stornoway produced 417,362 carats from the processing of 512,005 tons of ore with an attributable grade of 82 carats per hundred tons, compared to 385,151 carats recovered during the first quarter from the processing of 419,233 tons of ore at an attributable grade of 92 cpht. Diamond production in Q2 of 417,362 carats was below the plan of 486,591 carats (-13%) due primarily, they comment, to the processing of lower grade ore. The average processing rate of the plant during the quarter was 5,626 tons per day, increasing to 6,149 tons per day in June. This meets the name plate capacity of the Renard process plant, which is 6,000 tonnes per day, and represents the completion of the project’s production ramp-up. Ore was sourced primarily from the Renard 2 kimberlite and stockpiles. All sales prices are quoted on a run-of-mine basis.

Matt Manson, President & CEO commented: “At the end of the second quarter, we are pleased to report robust production figures and the on-schedule attainment of our process plant’s nameplate capacity, marking the end of our processing ramp-up. With seven sales now completed, we are encouraged by strong growth in diamond pricing, reflecting the underlying market demand for the Renard product. This is despite the ongoing issue of diamond breakage which is impacting our production’s quality and size profile." Furthermore, they note, "Small diamonds continue to achieve substantially lower market pricing than was being achieved prior to the Indian de-monetization events of late 2016. Nevertheless, the average run of mine pricing for Renard diamonds has increased in real terms by 19% since the first sale was completed in November 2016. While the rough market has strengthened modestly during this period, the size of the increase reflects the growing acceptance of the Renard diamond production by Stornoway’s tender sale clientele. Stornoway’s 6th sale of 2017 achieved the first result above US$100 per carat with a standard run-of-mine sales mix, despite continuing to exhibit a lower than expected proportion of larger diamonds. This is an encouraging result, and consistent with Stornoway’s FY2017 pricing guidance of US$100 to US$132 per carat."