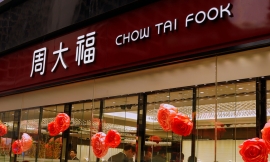 Chow Tai Fook continued its upward sales trend during Q1 2017 (three months ended June 30), as retail sales increased 17% in value in Mainland China and 7% in Hong Kong and Macau. After 12 consecutive quarters (3 years) of same store sales decline in Hong Kong and Macau, dating back to Q4 2014, the Hong Kong-based jeweler has now experienced growth for the second quarter in a row. Same-store sales growth in the two regions amounted to 11% and 5%, respectively. Additionally, E-commerce for jewelry business in Mainland China continued to benefit retail sales value with a 140% year-on-year growth in Q1, backed by a strong volume increase of 125%.

Chow Tai Fook's positive results come just a few weeks after Lukfook Jewellery announced a surge in profit for fiscal 2017 (7% to $131.6 million) despite an 8.7% drop in revenue. In their Annual Results statement, Mr. Wong Wai Sheung, Chairman and Chief Executive of the Group said, “Uunder the impact of the slowdown in economic growth in Mainland China and the changes to the Individual Visit Scheme, Mainland tourists tended to stay shorter period of time. Consumption expenditure per capita continued to fall with the poor macro-economic conditions and decreased spending power of consumers." But he added that, "The situation, however, has started to stabilise and improve recently.”