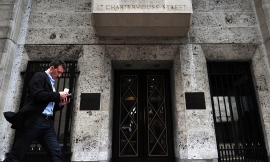 Anglo American plans to redevelop the historical premises of its De Beers diamond unit after choosing the building as its preferred option for a new London headquarters, write Jack Sidders and Thomas Biesheuvel for Bloomberg. Citing people with knowledge of the plan, they write that AA intends to modernize the Charterhouse Street property and then transfer staff there from its current premises near Buckingham Palace. The decision is subject to Anglo winning planning and regulatory approvals for the project, two of the people said. The company has also examined relocating staff to a new building and selling the De Beers property.

In April last year, the announcement was made that De Beers was to leave its London headquarters at 17 Charterhouse after almost a century, as parent company Anglo American trims costs, and staff effectively left earlier this year. Charterhouse Street became the centre of De Beers’ empire – and therefore the global diamond trade – in the early 1930s. De Beers no longer used the building to hold the company sights even prior to considering the move to another location; the sights moved to Botswana in November 2013. At the time it was though that Anglo American would seek a buyer for the building as part of a wider restructuring as it seeks to raise $4 billion in asset sales to cut its debt burden.