Rise of Recycled Diamonds a Double-Edged Sword for Industry 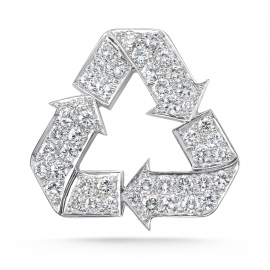 The market for recycled diamonds has grown substantially in the last decade following the financial crash of 2008, and though it is hard to guage the market as a whole due the less-than-transparent avenues through which they are bought and sold, estimates are that the trade in recycled diamonds is now worth between five and ten percent of the global market - or approximately $1 billion - and is expanding. Abraham Dayan, writing for Rough-Polished, looks at some of the players in this growing market, the advantages it provides for manufacturers in need of affordable supply and retailers that need to respond to market trends quickly, but also the pitfalls for the (rough) diamond industry and even consumers.

A company such as White Pine Trading LLC, one of the world’s largest recycled diamonds companies, holds recycled diamond sales events monthly in the major diamond hubs, such as Mumbai, Dubai, Hong Kong and New York, Dayan writes. "Sales typically feature tens of thousands of carats of recycled melee, breakout and single stones, certified and non-certified, in all shapes, sizes and qualities, as well as jewelry, said the firm, which has offices in New York, Tokyo and the United Kingdom." They also manufacture diamonds in New York and India, selling jewelry and diamonds mainly in the U.S. and Asia to a network of industry players, including retailers, jewelry manufacturers and dealers.

"What", he asks, "are the benefits of recycled diamonds both for diamond manufacturers and jewelers, as well as the general public?" Essentially, they are available in large quantities at low prices for re-cutting, are already sorted and polished. "Bought for less than their rough counterparts currently cost and already polished and simply needing what are often cosmetic changes, the advantage for manufacturers is clear." But what about the mining industry? "The impact of recycled diamonds on the diamond industry is still not clear", writes Dayan. "It's very difficult to estimate," said one Israeli diamantaire. "When customers buy a piece of jewelry with a re-cut diamond, they cannot know, unless the seller makes it clear, that it has an 'old' stone set in it. They probably do not even think about it. But every time that happens, that is demand for another diamond that has been lost to newly mined diamonds."

Dayan says it is estimated $1 trillion worth of 'used diamonds' are locked away in private hands; should they find their way onto the market, demand for 'new' diamonds may suffer. "And that is in direct contradiction to the premise of the diamond business that most merchandise never re-enters the market. A person’s diamond jewelry, with its powerful emotional baggage, is supposed to be hardly ever sold off, but rather passed on to children or other loved ones, thus passing on a love for diamonds and creating new demand." He concludes, "The diamond trade appears to be relatively upbeat about the issue for now." As one diamantaire said: "I find it difficult to believe that a man would propose marriage with what is basically a second-hand diamond. Similarly, he is not going to celebrate a wedding anniversary, or purchase a special gift for a female member of his family with a piece of jewelry that came from an old piece of jewelry." But can we be so sure? And furthermore: would he even know it was recycled?