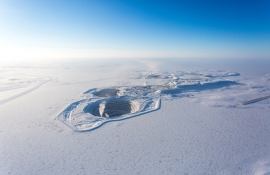 Dominion Diamond Corporation received approval to use water for the Ekati Diamond Mine in Canada’s Northwest Territories. The regions Minister of Environment and Natural Resources, Robert C. McLeod, signed off on the type-A water license for Dominion’s mine as well as the Jay project, a high-grade kimberlite pipe which the company believes will extend the lifespan of Ekati for a decade.

The Jay project is located in the 100%-owned Buffer Zone at the Ekati Diamond Mine. Jay, the large high-grade kimberlite pipe, was approved for construction by the Company in July 2016. The project includes a plan to build a dyke, draining part of a lake and digging an open pit, all to be funded from existing cash and internal cash flow.

Receiving the water license is “a significant milestone for the Jay project,” said Chairman of Dominion, Jim Gowans. He continued stating, “this project is an important part of our overall growth strategy which will deliver value over the long-term.”