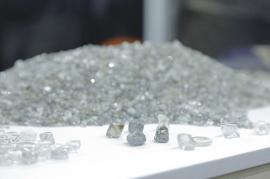 The Kimberley Process has published its 2016 figures for the global diamond trade, covering rough diamond production and value, imports and exports, as well as KP Certificate counts. The most notable takeaway is that while overall the volume of rough diamond production in 2016 increased 5% to 134.1 million carats from 127.4 million carats, the value of that output slid 11% to $12.4 billion from $13.88 billion the previous year. From a trading standpoint (imports & exports), however, the KP reports a significant upturn following the 'crisis' year of 2015.

Russia has solidified its position as the leading producer in terms of volume and value – it first usurped the top position of value production from Botswana in 2014 – capturing 29% of global production value at nearly $3.6 billion from over 40 million carats produced. Botswana clawed its way back to realize 23% of global value despite its actual figures falling nearly 5% to $2.85 billion from $3 billion. After Botswana, the leading value producers are Canada, South Africa, Angola, and then Namibia ($533/ct) and Lesotho ($1,066/ct) on the back of their high price earned per carat. DRC and Australia follow as a result of massive output coupled with low prices ($11/ct and $16/ct respectively), with Sierra Leone rounding out the top 10.

For the most part, the main players when it comes to rough imports and exports remain unchanged, but the scale of rough-diamond trading increased last year, as did average trade prices. Rough imports increased 15% in value to $48.6 billion in 2016 from $42.2 billion in 2015, as import volume increased 11% to 380.8 million carats from 344.4 million carats. Accordingly, export values increased 13% to $47.93 billion from $42.3 billion on the back on a 9% increase in volume, to 382.1 million carats from 351.3 m cts. The average price for imports ($128/ct) as well as exports ($125/ct) increased by 4%. The leading importer of rough diamonds is still India – a given in light of their manufacturing dominance – at $16.7 billion, good for 34% of all imports, followed by the European Union (read, Belgium) at $13.2 billion for 27% of all rough imports globally. They are followed by UAE, with $6.5 billion worth of imports for 13% of the pie, then Israel and newcomer China, which imported the same amount of rough ($1.8 billion) but displaced Botswana on the list.

The EU continued to be the leading exporter of rough diamonds, thanks to the thriving rough diamond trade in Antwerp, increasing the value of its exports 13% to $13 billion, good for 27% of all exports. UAE (Dubai) follows Antwerp with 18% of all exports, up from 15% from a year ago, and then Botswana – where De Beers’ goods are consolidated – with 12% of all exports, at $5.6 billion. Russia (ALROSA and Grib) is the fourth largest exporter and the trade center of Israel rounds out the top 5.

Again, the European Union (Antwerp) was far and away the leading issuer of KP Certificates for rough exports, issuing 29,350 KPCs, or 48% overall. In 2016, 61,665 certificates were issued with rough exports, compared with 53,621 the year before.