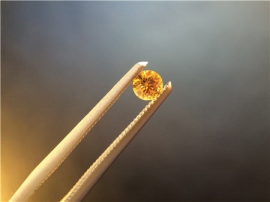 North Arrow Minerals Inc. has announced the start of a $3.2M exploration program at the company’s 100% owned Naujaat (now-yat; formerly Qilalugaq) and Mel Diamond Projects, Nunavut, Canada. The drill program at the Naujaat Project will see North Arrow drill 4,500 metres and collect a 200 ton mini-bulk sample from the highest grade phase of the Q1-4 kimberlite. The goal is to extend the Inferred resource to a depth of at least 300 metres below surface and better define the microdiamond population, which includes a population of rare, fancy orangey yellow diamonds. The sample will be shipped south in late August and processed in the fall. At the Mel Project North Arrow will conduct detailed prospecting and geophysical surveys of high priority kimberlite indicator mineral (KIM) targets, which could result in the discovery of a new kimberlite field.

Ken Armstrong, President and CEO of North Arrow, stated, “We are pleased that drilling is underway at the Naujaat Project for the first time in over 12 years. Q1-4 is a large kimberlite. There is excellent potential to extend at depth, beyond the reach of past drilling efforts. The current program will provide important information to confirm and update the size of the Q1-4 kimberlite as well as improve our understanding of the deposit's internal geology and diamond distribution." According to an article by Stockhouse, in 2014 and 2015, North Arrow collected a small bulk sample at Naujaat with the goal of gauging diamond values, but the carat values on the small 384-carat package came in significantly below expectations. "North Arrow shares were relegated to the market penalty box and the company has been largely under the radar since, despite important background work that set the stage for this year’s program."

The primary conclusion of the diamond evaluators, writes Stockhouse of the earlier 384-carat parcel of Naujaat diamonds, is that it was too small to properly evaluate. North Arrow plans to remedy that, in part with the 200-ton bulk sample now initiated, which should yield another 80 to 100 carats. "Another complicating factor at Naujaat is the presence of two distinct diamond populations of different ages, including a population of rare fancy yellow diamonds. It’s a consideration that was not factored into the prior carat valuation. It will be next time." As Armstrong says of Q1-4, “This kimberlite hosts an important population of fancy orangey yellow diamonds, which have been recovered from every phase of the kimberlite and have the potential to positively impact the overall diamond value of the deposit. The 2017 mini-bulk sample will advance this evaluation by providing an indication of the characteristics of these rare, coloured diamonds in the highest grade phase of the deposit and will help with planning a larger bulk sampling program in 2018.”

The 12.5 hectare Q1-4 kimberlite is the largest diamondiferous kimberlite pipe in the eastern Canadian Arctic. North Arrow's May 2013 Technical Report outlines an Inferred Mineral Resource at Q1-4 estimated to be 26.1 million carats total diamond content (assumes 100% recovery) from 48.8 million tons of kimberlite with an average +1 DTC total diamond content of 53.6 carats per hundred tons (cpht) extending from surface to a depth of 205m. On January 17th, 2017 North Arrow announced a property purchase agreement with Stornoway Diamond Corporation under which North Arrow will acquire Stornoway’s remaining interest in the Qilalugaq Project to bring North Arrow's interest up to 100%.