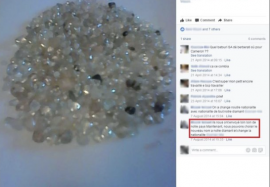 A new investigative report by Global Witness shows how smugglers are using social media platforms such as Facebook Messenger and WhatsApp to get diamonds linked to the ongoing conflict in the Central African Republic (CAR) out of the country and into international markets. Representatives went undercover by creating a social media profile for a fictitious diamond buyer that claimed to be based in Antwerp but operates internationally. They managed to speak to several dealers who promised easy access to CAR’s diamonds. Their year-long investigation describes how deals are done despite continued violence and displacement in the diamond-rich country. Titled "Game of Stones", the premise of the report is: "While the international community is working with CAR’s government and diamond companies to establish legitimate supply chains; smugglers and traders are thriving in the parallel black market."

CAR essentially descended into chaos in March 2013 after a coup d’état in 2013 sparked a civil war. The Kimberley Process (KP) initiated a temporary suspension of CAR in May 2013, effectively placing an international embargo on exports of CAR diamonds, which were found to be funding armed groups in the inter-religious conflict. In an Administrative Decision from June 2014, KP Participants and Observers noted that production of diamonds was continuing in CAR, and had detected cases of international shipments containing diamonds of CAR origin. The KP encouraged diamond trading countries to "exercise enhanced vigilence", to report any suspect shipments, take appropriate action against any individuals or companies involved in the illicit trade of CAR diamonds and to do what is necessary to ensure CAR stones do not enter the legitimate trade. Last year, the KP partially lifted the embargo on zones it deemed compliant and conflict-free. Initially located in the southern region of Berberati, three more ‘compliant zones’ in the sub-prefectures of Boda, Carnot and Nola in the west of the country were announced in September.

Shortly thereafter, a prominent NGO called Partnership Africa Canada found the illicit trade of conflict diamonds was ongoing, publishing a report claiming that Cameroon was allowing conflict diamonds from the Central African Republic to cross over its borders and into the legal supply chain due to poor controls, smuggling and corruption. “While international outcry about ‘blood diamonds’ financing war in the Central African Republic sparked action to stop the trade, the same spotlight has not been turned on CAR’s neighbours. Our investigation shows the reality on the ground and how conflict diamonds from CAR still have entry points to international markets through Cameroon." Global Witness has now tested this assertion and has concluded that not only is it accurate, and not only do the smugglers operate with ease, but they are active on social media and can be contacted from wherever one may be, and are 'open for business'. "Even where ther is war," said one of the dealers, "there are dubious buyers who go to buy [diamonds] and get [them] out fraudulently ... Traffickers go retrieve ... diamonds towards the rebel side because it's still much cheaper."

Global Witness said it spoke to seven diamond dealers, including five CAR nationals. Five openly discussed smuggling across international borders. "Traders described the use of everything from private planes to cars and motorcycles as they discussed their experience of trafficking diamonds across CAR's porous borders. But getting the stones out of CAR is only the first step. Before they can be sold onto international markets, the orphaned stones need a new home. Several traders referred to this as the process of 'naturalising' their diamonds. ["They give CAR diamonds Cameroonian nationality".] Once out of CAR, buyers claim that the stones have been mined elsewhere. They mix them with other stones, get the right papers, and send them on their way...", allegedly headed to buyers in Belgium, Brazil, France, China, Israel, Lebanon, South Africa, Sierra Leone and Liberia. The largest parcel they described was over 900 carats. Only two dealers, both CAR nationals, said they did not engage in smuggling and respected the Kimberley Process.

The Global Witness report also documents a brief history of the recent conflict and the highly embedded process of "systematic looting" since 2013. Earlier reports confirm smuggling links with Sudan, Chad, Qatar and Dubai. The 'compliant zones' inside the country further complicate the threat, as diamonds can relatively easily be transported from non-compliant to compliant zones and legitimized: "These are unlikely to be detected by any of the secondary forensic tests to exclude eastern stones that may have slipped through the net." Furthermore, large stocks of diamonds purchased during the conflict are sitting in company offices awaiting an opportunity to leave their troubled past behind them and join international markets.

The KP clearly has its work cut out for it in this still-turbulent country. “CAR is precisely the kind of case the Kimberley Process was established to confront,” concludes Michael Gibb of Global Witness. “It illustrates perfectly that it cannot tackle the continued trade in conflict diamonds alone. Diamond companies must take greater responsibility for building an industry that stops ill-gotten gains reaching international markets.” They add, "The course on which CAR sets off now will define the next phase of its economic and political development. If its resources are again seen as fair game, even in the absence of good transparent governance, this risks further entrenching the corruption and looting that has plagued the sector in the past ... This is an occasion for a new start - not a business opportunity."