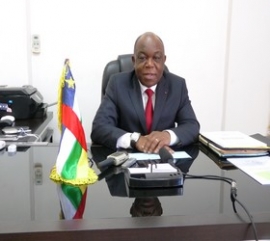 The Ministry of Mines, Energy and Hydraulics of the Central African Republic (CAR) has issued a press release categorically rejecting the allegations contained in Global Witness' report, "Game of Stones", which detailed the NGO's investigation into diamond smuggling from CAR. "The Minister [Léopold Mboli Fatran] refutes the broad allegations in the Report which is fundamentally based on a few testimonies from those involved in the fraud and which lacks substance in the several claims made against the Central African Republic."

The statement further reads: "The due diligence processes which the country had to follow according to an Operational Framework ... were of a kind to cause substantial delays to recommence normal business. Despite this, the Government of CAR was patient and worked closely together with the Kimberley Process (KP) to avoid misconceptions or any wrongdoing." The statement points out an error in Global Witness' report about armed groups at mining sites inside the green (compliant) zone in 2015, whereas these zones were not identified until 2016. It also clarifies that CAR has worked closely with the KP, its CAR Monitoring Team which included World Diamond Council representatives, as well as officials from neighboring countries DRC and Cameroon.

"The Government recognizes that cross-border smuggling of rough diamonds is a criminal activity that has always existed. It was exacerbated by the effects of the KP suspension from May 2013 to May 2016, and certainly zith the use of new technologies and social networks. However, the Government declares that this phenomenon is clearly declining at present due to the courageous measures that have been taken to ensure better control of the green zones recognized by the KP ... It is in the interest of the country that diamonds that leave the country are taxed. Lifting of sanctions and fighting illicit trade should go hand in hand. It is through the payment of these taxes that the Government can reinforce the Special Anti-Fraud Unit (USAF) who have the duty to combat illegal trafficking in the country's mineral resources ... In this respect, it is important to remember that one family out of four in the country indirectly lives from artisanal and alluvial mining."

The English version of the press release is available here.