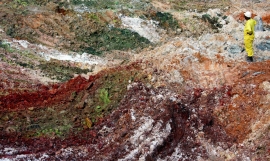 South African equity group Pallinghurst Resources Ltd. on June 26 announced it has received 96% of shareholder support in its quest to move ahead with a bid to fully acquire Gemfields, in which it is already the largest investor; more than 75% of Gemfields shareholders have given their acceptance for the offer. Last week, Pallinghurst lowered the minimum number of acceptances from shareholders of Gemfields Plc on its takeover offer to 60 percent, from 75 percent, making its offer unconditional. This move came after China's Fosun International raised its offer for the gemstone company. The announcement puts to rest suggestions from Gemfields’ board that Pallinghurst might have trouble gaining the necessary support. Gemfields told its investors it still believes Pallinghurst’s bid “undervalues Gemfields and its prospects as a leading player in the coloured gemstone sector,” and calls upon shareholders to take no action on the offer, which remains open until July 18.

In May, Pallinghurst made an unsolicited offer to buy the 53 percent of Gemfields it doesn’t already own, but Gemfields found the offer offensive. A few weeks later, Chinese conglomerate Fosun International Ltd. made an initial proposal regarding a possible cash offer for the British gemstone miner, offering to pay about $286 million for the company, a “significant premium to the Pallinghurst offer,” Gemfields said. Fosun thereby emerging as a rival to Pallinghurst, but Fosun Gold’s cash offer for Gemfields lapsed on the same day as the Pallinghurst vote.

Pallinghurst said that should Gemfields accept the offer, it would aim to delist the company from the AIM market of the London Stock Exchange. It also would not only focus on the company’s core emerald and ruby operations in Zambia and Mozambique but also accelerate the “development of its existing portfolio of projects” to mitigate its dependency on its assets, and explore all alternatives for Fabergé. As for its reasoning behind the offer, Pallinghurst said that since it has been Gemfields’ biggest shareholder from the start, “unlocking Gemfields’ full value potential is of paramount importance.”