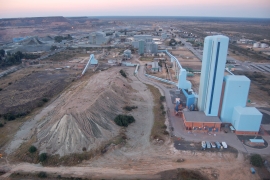 Botswana's Debswana Diamond Mining, a joint venture between De Beers and the southern Africa country's government, plans to extend the lifespan of its Jwaneng mine beyond 2024, reports Reuters Africa, citing a mines minister. The project, known as "Cut 9", has been under discussion for five years as part of the Jwaneng Resource Extension Project. This Project led to the development of Cut 8, the $3 billion expansion project designed to prolong the Jwaneng Mine an additional 7 years, ensuring continuous production until at least 2024 and producing 100 million carats. Cut 8 started delivering first ore to plant in 2017. "Cut 9 will be a huge investment by De Beers as it will require a significant capital outlay," mines minister Sadique Kebonang said late on Tuesday. "We should be able to start Cut 9 in the next two to three years." He also said the Botswana government and De Beers have started talks about extending their ten-year marketing and sales agreement, which is due to lapse in 2020.

Jwaneng Mine is the richest diamond mine in the world by value. It became fully operational in August 1982. It is the flagship of Debswana thanks to its substantially higher dollar per carat obtained for its gems, contributing 60-70 percent of Debswana’s total revenue. Estimated production for the mine in 2017 is 12 million carats worth over $2.3 billion. The scale of the expansion project is huge, taking the 2.5km by 1.5km mine from a depth of 400 metres to 650 metres. The project (Cuts 8 & 9) will extend the life of Jwaneng to at least 2033, providing access to about 91 million tons of ore, containing an estimated 110 million carats of mainly high quality diamonds. During 2018, Cut-8 will become the main source of ore for Jwaneng. It is expected to contribute a total of US$28 billion (in 2014 prices) to Botswana’s economy and generate more than 1,000 jobs during the operational phase. In total, Cut-8 is projected to support more than 4,500 jobs per year, either directly or indirectly.