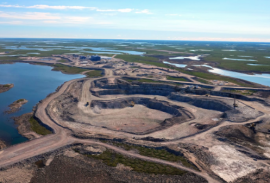 Mountain Province Diamonds' fifth diamond sale of diamonds from the Gahcho Kué mine in Canada was its best to date, setting new highs in overall revenue, carats sold and price per carat. The junior miner sold 220,000 carats at its June tender in Antwerp, earning $2.1 million for an average price of $95 per carat, a solid increase from the $72 and $86 per carat earned respectively in sales 1-3 and 4.

The company noted, "results from the fifth sale are elevated in part from the inclusion of a selection of the fancies and specials won by the company otherwise scheduled for inclusion in the sixth sale, which will occur in the second half of July." Mountain Province owns 49% of Gahcho Kué in a joint venture with De Beers. The two miners split the project’s regular run-of-mine rough production, bidding against each other for the fancy and special goods, which Mountain Province won this time around. "Excluding these high value diamonds," they announce, "the average value realized per carat was US$75. This reflects the finer size and lower quality distribution of this particular sales offering."

Reid Mackie, Vice President Diamond Marketing, said, “The June tender sale was our best attended to date and produced a record number of bids. Repeat customers won 75% of lots, indicating that the rough market’s understanding of our diamonds’ performance at manufacturing is positive and well on track.” They further note, "Very positive prices were realized on the fancies and specials, and prices realized on the remainder of the offering also exceeded expectations." In total, Gahcho Kué has delivered 1.9 million carats, with an average grade of 1.96 carats per ton.