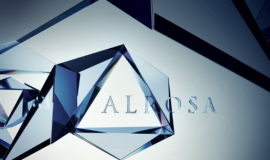 ALROSA said in a press release of its own that the parties at the meeting in Moscow discussed "topical issues of the diamond market and the current situation in the Israeli diamond industry." The Israel Diamond Exchange President told about new diamond manufacturing factories, projects for the development of Internet-trade in polished diamonds, and informed ALROSA’s management about the International Tender Center launched early this year – a trading platform for diamond producers. The Israeli diamond sector management also welcomed the efforts of ALROSA and other members of the Diamond Producers Association to resume the generic diamond marketing program. The DPA has increased its marketing budget from $6 million previously to $57 million this year. As for taking part in the financing of the DPA's campaigns, Dvash and Schnitzer promised they will strive to promote a financing program through the member bourses of the WFDB. Sergey Ivanov highly appreciated achievements of Israeli colleagues in the sphere of separate trade in natural and synthetic rough diamonds.