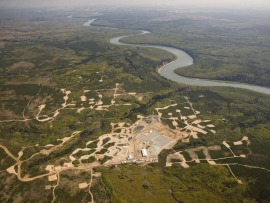 Rio Tinto on Friday signed an option agreement positioning it to potentially become the majority owner of the Star-Orion South Diamond Project, an advanced-stage diamond exploration project about 60 kilometres east of Prince Albert, Canada. Saskatoon-based Shore Gold Inc., which has been working to establish a diamond mine east of Prince Albert since 1995, said in a news release that it simultaneously bought out its partner in the Fort à la Corne joint venture, thereby getting a 100 per cent stake in its Star-Orion South diamond project, and signed the option deal with Rio Tinto Exploration Canada Ltd. Shore Gold president and CEO Ken MacNeill said in a statement. “Rio Tinto is one of the few companies in the world with the resources and expertise to move forward with a project of the magnitude of the Star-Orion South Diamond Project.”

Diamond industry analyst Paul Zimnisky concurs, telling CBC News,  "Rio Tinto wouldn't be involved in something that wasn't world-class status. They're large enough of a company where they can make the capital commitment to put this thing in production." A feasibility study released by Shore in 2011 cited a potential mine life of 20 years, though Zimnisky says the project has the potential to be mined for 100 years, and an estimated capital cost of $1.9 billion. An updated feasibility study aimed at lowering that cost is expected from Shore. Shore Gold's MacNeill has said the updated feasibility study will “significantly” reduce the project’s capital costs. The company obtained environmental approval from the federal government for the project in 2014, but consultations with nearby James Smith Cree Nation aimed at securing provincial approval are still underway.

Under the terms of the agreement, Rio Tinto has three years to spend $18.5 million on drilling and the pulling of a bulk sample before it can move on to receive the option of becoming a joint-venture partner and eventually owning 60% of the project. Zimnisky told CBC News he believes it could take 10 years before the mine would go into production. He says one challenge the project faces is its amount of "overburden", or the amount of material that needs to be removed first before reaching the diamond-bearing kimberlites, butsays Shore is looking at ways to address that as well as X-ray technology to speed up the processing of diamonds within a plant. Shore Gold's statement reads, "The Project is in close proximity to established infrastructure, including paved highways and the electrical power grid, which provide significant advantages for future mine development." Its 2015 study for the project updated the Mineral Resource Estimate for the Star and Orion South kimberlite deposits to 393 million tons of Indicated Mineral Resource containing 55.4 million carats of diamonds at a weighted average price of US$210 per carat. In addition to the Indicated Mineral Resource Estimate, the Star and Orion South Kimberlites include Inferred Resources containing 11.5 million carats.

The company's stock price closed at $0.34 on Friday, the highest it's reached in five years.