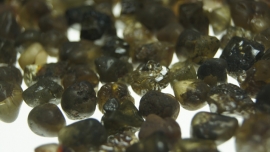 Mines minister Walter Chidakwa told the Zimbabwe parliament yesterday that the Zimbabwe Diamond Mining Company (ZCDC) still has 300 million tons of diamond ore to mine in Chiadzwa, reports NewsDay. “The organisation has 300 million tons of ore containing 200 million carats all in the inferred category or ore resource classification, whose confidence level is currently about 20%,” Chidakwa said. “We are now working to improve confidence levels, and the 300 million tons comprise 20% alluvial and 80% conglomerate ores,” he said. Chidakwa also said new Mines secretary Munesuishe Munodawafa would not interfere with the ZCDC board, in contrast to what transpired with former secretary Francis Gudyanga.

He said ZCDC had to date surpassed the previous year’s diamond production, recording production levels of 1,039,925 carats in the five and a half months up to June 2017, compared to a total of 961,000 carats produced in 2016. “Annual production is expected to increase by 150% to 2.4 million carats for the full year of 2017. For the comfort of Members of Parliament, I now get figures of production at the end of the day from Chiadzwa. At the end of the week, we declare figures to the Finance and Economic Development minister and the Reserve Bank of Zimbabwe.” He said ZCDC was currently mining on three concessions, former Mbada, Marange and DTZ-OZGEO concessions respectively.