Rob Bates on What Jewelers Can Learn from Independent Bookstores 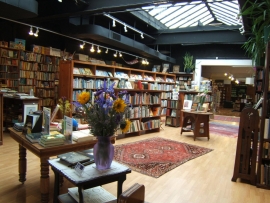 JCK news director Rob Bates takes a look at the resurgence of independent bookstores in the U.S. and sees parallels with independent jewelry retailers: "It’s clear the jewelry industry - and in particular the number of independent jewelers - is shrinking. But that’s true of retail overall. And, until recently, it was true of independent bookstores. If you compare today versus decades ago, the number of brick-and-mortar booksellers has fallen. But the independent segment has reversed that trajectory. The number has risen for the last eight years. How has the industry escaped the downward spiral?" Bates discussed this question with Oren Teicher, CEO of the American Booksellers Association.

Teicher explains several keys that have enabled independent bookstores to thrive, starting with benefitting from the 'buy local movement': “The localism movement has been huge for us,” says Teicher. “We aggressively encourage our members to promote themselves as locally owned," but says that customers are not always aware of ownernership. But this is important because, "[Americans] like to shop at independent stores. They value that diversity. They don’t want everything to be cookie cutter." Secondly, he urges his retailers to take full advantage of technology to improve operational efficiency, reduce costs and communicate more effectively. "It’s a lot less expensive to reach customers in 2017 than it was 20 years ago.” Further, he says that the industry has recognized the benefit of supporting independent retailers. “The industry figured out they needed brick-and-mortar stores to survive," he says. "There’s been a huge recognition by suppliers that this is a two-way street and that their profitability is connected to our long-term viability.”

Perhaps most importantly, Bates writes, "There is a renewed focus on the in-store experience. In language jewelers will be quite familiar with, Teicher says bookstores are now focused on 'creating an experience instead of just selling a commodity.'" But it takes work. “The store has to be more than a physical place, where you put up shelves, and hope the customer comes,” Teicher says. “Today you have to be engaged in creating an experience; you have to be engaged in the community. You have to work harder than ever to give consumers a reason to come and buy from you." The real key, Bates says, is that bookstores renewed themselves by being open to reinvention. He leaves the final word of good advice to Teicher: "The world is changing, consumer tastes and behavior are changing. Retailers who think they can open their door and do the same thing in 2017 that they did in 2012 are kidding themselves. You have to keep changing and evolving.”