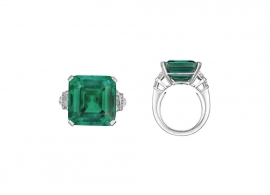 Jeweller Harry Winston purchased the "Rockefeller Emerald", a flawless 18.04-carat Colombian emerald, for more than $5.5 million at Christie’s New York Magnificent Jewels auction. At $305,500 per carat, the emerald becomes the highest priced emerald per carat ever sold, but failed to break the overall record for the precious gemstone: a 23.46-carat emerald and diamond pendant brooch by Bulgari, formerly owned by Elizabeth Taylor, sold for more than $6.5 million ($280,000 per carat) in December 2011 as part of the landmark auctions of “The Collection of Elizabeth Taylor” at Christie’s New York.

John D. Rockefeller Jr. - son of Standard Oil co-founder John D. Rockefeller - acquired the emerald in 1930; it was believed to have been created by Van Cleef & Arpels for his wife, Abby Aldrich Rockefeller. The stone stayed in the family after she died in 1948; the brooch was then disassembled and the 18.4-carat emerald was given to his son, David Rockefeller, who then asked New York jeweler, Raymond C. Yard, to mount the gem on a ring. Appropriately, the auction took place in New York at the Rockefeller Center, with the Magnificent Jewels auction sale total including buyer’s premium earning $26,126,500.