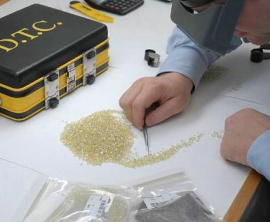 De Beers sold $530 million worth of rough diamonds at the fifth sales cycle of 2017 (Global Sightholder Sales and Auction Sales), marking a 1.5% increase over Cycle 4 ($522 million) and a 6% drop from Cycle 5 in 2016. For the year thus far, the mining giant has achieved sales valued at $2.92 billion, representing a 3.6% decline from the $3.03 billion sold during the first five sales of 2016. Bruce Cleaver, CEO, De Beers Group, said: “Following positive feedback from the Las Vegas trade show, and in line with recent trends, we saw continued good demand for De Beers rough diamonds in the fifth sales cycle of the year.”

The cycle took place against the background of a dispute with South Africa's minerals minister, Mosebenzi Zwane, who took the surprise decision to refuse to grant an exemption to De Beers Consolidated Mines (DBCM) to export diamonds to Botswana for aggregation, resulting in the absence of South African rough diamonds from De Beers' sightholder sale. Botswana Chamber of Mines chief executive, Charles Siwawa, was nonplussed that such a significant decision could be taken unilaterally by the minister, but clearly his move to block supply from South Africa for aggregation in Botswana did not stop operations at DTCB. It is unclear the extent to which it disrupted the diamond mix in the process. Diamonds produced by De Beers in South Africa, Botswana, Namibia and Canada are aggregated in Gaborone like they used to be in London.

Rapaport News cites sources who said that rough prices remained firm on the whole and increased a few percentage points in certain categories. The news outlet writes, "Higher rough prices without a corresponding increase in polished demand could lead to diminished profits for the midstream, with some cutters already headed toward a loss on rough, traders warned." Rough demand, as CEO Cleaver noted, is going strong, but polished prices are not following suit, leading to concern of shrinking margins in the midstream.