Indian Diamantaires to Strike In Protest Against GST on June 17 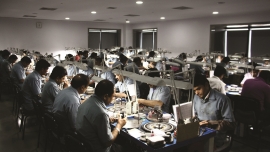 Indian diamond manufacturers, brokers and merchants in the manufacturing center in Surat have unanimously decided to shut the industry for a day on June 17, demanding exemption of the polished diamonds from the 3% Goods and Service Tax (GST), writes The Times of India (TOI). They have formed a committee to lead the protest against the GST council's decison to impose 3% GST on polished diamonds and 18% GST on diamond trading.

Committee members led by President Nand Lal and Jeram Kalasia are scheduled to address the Surat Diamond Association (SDA) today regarding their demands on GST exemption on polished diamonds. Jairam Kalasia told TOI, "Diamond manufacturers and merchants work on wafer thin margins, which are sometimes less than one percent. In such circumstances, the 3% GST on polished diamonds and 18% on diamond trading will be a catastrophe for the industry." He added, "The small and medium units, brokers and merchants will have no other option but to shut their shops. This will render many diamond workers jobless and will result in a huge loss to the foreign exchange to the Central government."

President of Surat Diamond Association (SDA), Dinesh Navadia said, "We are very much concerned with the GST rates for the diamond industry. The profit margins are very thin and the huge tax rates will only collapse the industry. We are going to Delhi on June 18 to represent the issue to the GST council members and the Union finance minster." TOI notes there are approximately 4,000 diamond units, more than 5,000 brokers and over 2,000 merchants operating in the diamond hub of Varachha, Katargam and Mahidharpura.