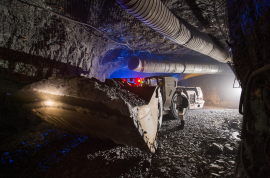 The South African government has raised the minimum threshold for black ownership of mining companies to 30 percent in a surprise move that weakened the rand and knocked shares in the London-quoted mining groups Anglo American and Petra Diamonds. Shares in Anglo American have fallen sharply after South Africa announced changes to its mining regulations. They dropped 57p, or more than 5 percent to £10 after South Africa’s mineral resources minister Mosebenzi Zwane said miners have to raise their black-owned stakes to 30% from 26% under a revised version of its mining charter. Petra Diamonds' shares also fell 6%, while the rand fell 2% after the document was revealed. The move was also cited as contributing to weakness in mining stocks like BHP and Rio Tinto on Australia’s bourse.

The news is likely to draw a furious response from the mining industry, writes the Financial Times (paywall), saying miners have complained about the lack a consultation as the new charter was drawn up. The body representing South Africa’s miners (The Chamber of Mines) said it would try to block the move through the courts. In addition to raising ownership percentage to 30%, 1% of revenue must also be paid to the Mining Transformation and Development agency, which helps black communities. Mosebenzi Zwane, the mining minister and close ally of President Zuma, who was appointed a year ago, said that companies had been given a year to adjust to the new threshold because a draft was published last April. “The mining sector does not exist in a vacuum,” Mr Zwane said. South African miners needed “strong legislative regimes” to thrive. Zwane added that the government was “not blind” to the downturn, but said, “there’s a need to produce a new era of industrialisation driven by young economic champions,”

Meanwhile The Chamber of Mines said the policy was seriously flawed and complained that the industry had not been consulted as it had for previous mining charters. Roger Baxter, chief executive of the chamber, said: “We will not sign this charter because it is not our charter.” The Times/The Australian writes, "The abrupt announcement appears to have caused disquiet even in the ranks of the ruling ANC. The party’s economic transformation committee summoned the minister for an explanation. 'Given the fact that the mining industry has shed about 60,000 jobs in the last five years, we don’t want legislation that will add to that bloodbath', it said." The black economic empowerment rules were designed to rectify the inequality arising from the apartheid era, which came to an end in 1994.