Concerns of Violence if US Drops Conflict Minerals Rule (Dodd-Frank) 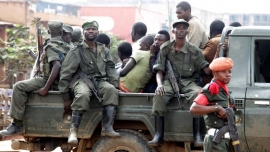 Thursday June 8, the US House of Representatives approved legislation to erase a number of core financial regulations put in place by the 2010 Dodd-Frank Act, as Republicans moved a step closer to delivering on their promises to eliminate rules that they claim have strangled small businesses and stagnated the economy, writes the New York Times. NYT is referring to a draft executive order that would suspend regulatory controls designed to prevent US companies profiting from and encouraging the spread of “conflict minerals” that spur violence in Democratic Republic of the Congo and neighboring countries. Armed rebels and criminal gangs have been funded for decades by the illicit trade in Congo's minerals, estimated to be worth $24 trillion, according to the U.N. The minerals are essential ingredients in smart phones, laptops, tablets and other high-tech products. Citing warnings from Congolese civic groups, rights groups and U.S. senators, ABC News writes, "Increased violence and corruption in central Africa could be the result of the recent decision by the U.S. Securities and Exchange Commission not to enforce a rule requiring American companies to report their use of conflict minerals."

The rule - contained in section 1502 of the Dodd-Frank Wall Street Reform and Consumer Protection Act introduced in 2010 - requires companies to disclose whether any of their products contain, and thus if any of their suppliers buy conflict minerals that originate in the DRC or any of the adjoining countries. It is a disclosure requirement only and places no ban or penalty on the use of conflict minerals, but companies must report annually on their due-diligence efforts to the SEC. The regulation got off to a rough start, as many U.S. companies pulled out of Congo and mineral exports from the region dropped significantly, forcing many artisanal miners to seek alternative livelihoods. Some warned of a permanent shut-down of the minerals trade in eastern DRC: "All sectors of our economy were suffocated or very nearly ground to a halt," as the Thematic Working Group on Mining and Natural Resources, a group of civil society organizations in eastern Congo wrote to the SEC. But eventually the rule helped to cut off funds for armed groups and reduce child labor in mines, according to the coalition.

Gradually it has been successful and widely applauded, with major international companies investing in and sourcing from mines in areas of Congo covered by the law. However, the Trump Administration's draft order alleges there is “mounting evidence” that the obligation on US firms to prove to regulators that they are not involved in blood minerals has “caused harm to some parties in the DRC and have thereby contributed to instability in the region and threatened the national security interest of the United States”. Global Witness, which has long investigated the role of mining in fuelling violence in eastern Congo, claims - contrary to the draft’s allegation - that responsible business practice was beginning to spread in eastern Congo. “This action could reverse that progress ... Suspending this provision could actually undermine US national security.”

The watchdog group is not alone in this line of thinking: "The conflict minerals rule has played a critical role in reducing violence in mining areas in the DRC," said U.S. Sen. Chris Coons, D-Delaware, who recently signed a letter with five other Democratic senators urging the SEC to uphold the rule. Leonard Birere, president of the Coalition of Anti-Slavery Civil Society Organizations in Goma, Congo, told The Associated Press that dropping the conflict minerals rule implicitly supports conflict in the Great Lakes region. "The activity of the armed groups in the mining sites had decreased substantially as well as their capacity for violence" due to the conflict minerals regulation, Birere said. And 41 Congo-based non-profit organizations related to natural resources wrote to the SEC that the conflict minerals rule, "undoubtedly contributes to reducing the rate of crime and human rights violations. All these efforts and progress will be destroyed if the U.S. government decides to contradict itself."

Despite last week's vote in the House, the measure still faces long odds of becoming law because of the slim majority that Republicans hold in the Senate, the NYT adds. This will not stop congressional Republicans from trying to defund it or change its scope, but major US companies, including Apple, Intel and Tiffany & Co., have said they do not want to see the rule scrapped and say they will not abandon the standard even if the law is gutted. As the Washington Post reported earlier this year, Apple said it plans to keep the protections “regardless of whether or not the law requires it.” Apple said it is pleading its case behind the scenes to White House and SEC officials. Intel said it, too, was committed to “responsible sourcing of minerals” regardless of regulatory changes. “We do actually believe in doing the right thing,” Intel spokesman William Moss said. And Richline, a major jewelry company, said it would remain committed to the standard “because the cause is worthy of these efforts.” Richline added that it was against “weakening or repealing a process that has already been set in motion and is just beginning to effect meaningful change.”

The debates are likely to continue for a while - and extend far beyond section 1502 alone - but the view from civil society now seems clear: as Sasha Lezhnev, associate director of policy at the Enough Project, an advocacy group said, “To stop now would be to greatly undermine the peace and security in Congo."