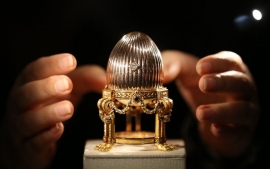 London-listed gemstones miner and Fabergé owner Gemfields said it has received an offer for the company from Chinese conglomerate Fosun International Ltd. Fosun made an initial proposal regarding a possible cash offer for the British precious stones miner, thereby emerging as a rival to Pallinghurst, whose recent takeover bid was considered to "significantly undervalue" the company. Gemfields said it was, “actively engaged in discussions with Fosun Gold regarding a possible competing offer for the entire issued and to be issued share capital of the company.”

The price of the offer is said to be a premium of 15.1 percent to Gemfield's closing price of 35.5 pence on Tuesday, and comes a month after its largest shareholder, South-African private equity group Pallinghurst, offered to buy out the company at its current valuation. Earlier this week, Gemfields said the approach was solicited after engaging with its advisors to, "explore ways to deliver maximum value for shareholders and to protect the interests of minority shareholders.” Gemfields said it was “actively engaged” in discussions with Fosun Gold over an offer for the company, believing it, "may lead to a cash offer at a superior value to Pallinghurst’s unsolicited offer.” The company had urged shareholders to take no action after the Pallinghurst offer, which remains open until 4 July.