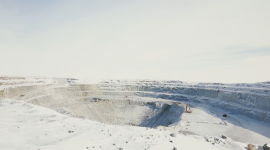 Candian miner Dominion Diamond Corp. reports an 18% surge in revenue in fiscal Q1 (three months ended April 30, 2017), which the company attributes to mining the high-grade Misery Main pipe at the Ekati mine, coupled with with stable production at the Diavik mine. Consolidated carats recovered increased 17% to 2.15 million from 1.83 million carats in Q1 fiscal 2017. Dominion sold fewer carats than in the same period last year - 2.3 million compared to 2.6 million - but the average price per carat increased to $90 from $69. Their strong rough sales were buoyed by the sale of higher-value goods from the Ekati mine, including approximately $21 million of high-value fancy colored diamonds, which contributed to the 18% increase in sales to to $211 million from $178.3 million a year earlier, and an increase of $49.6 million in gross margin to $30.8 million. Dominion holds ten sales per year and there were two sales in each of Q1 2018 and Q1 2017.

Nevertheless, in Q1 fiscal 2018, Dominion Diamond reported a consolidated net loss attributable to shareholders of $7.8 million, or $0.09 per share. The net loss includes a foreign currency exchange impact on income tax expense of $13.6 million, or $0.16 per share, and restructuring costs of $2.3 million, or $0.02 per share, relating to the relocation of the corporate head office. Jim Gowans, Chairman of the Board, commented: "The significant year-over-year improvement in sales, gross margin and Adjusted EBITDA is the result of our transition to high-value production at Ekati, and continued solid performance at Diavik. We are building upon the strong momentum that started at the beginning of this year, while advancing our project pipeline to support longer-term value generation."

On the diamond market as a whole, the company notes it, "has become more positive than in recent months and overall prices have improved from early fiscal 2018 levels after a slight dip associated with the residual effects of the November 2016 demonetization of the Indian rupee. In India, there has been a recovery of demand in the retail jewelry market following demonetization, and a noticeable rise in activity in the lower-end price ranges, notably from the larger jewelry chains. The diamond jewelry retail industry in the United States failed to meet market expectations in the first quarter of calendar 2017. The level of optimism in the market has since increased, except with regards to the outlook for the larger retailers."

During a conference call about the company's results, chairman Jim Gowans said that Dominion Diamond, which put itself on the market in March after rejecting an unsolicited bid worth US$1.1bn, was working “diligently” to achieve a sale. Their search for a new chief executive continues. Brendan Bell, next in line to take over, resigned in January, saying he did not want to relocate to new company headquarters in Calgary. He steps down on June 30.