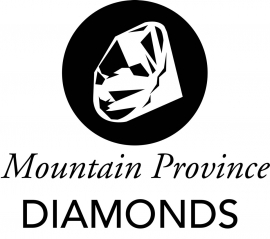 Mountain Province Diamonds - a 49% participant with De Beers Canada in the Gahcho Kué diamond mine - today announced that CEO Patrick Evans has left the company, and has appointed David Whittle as interim president and CEO. According to a company statement, Evans' departure was a mutual decision. Evans served as CEO of Mountain Province for 11 years, and will continue as a director of the company as well as provide assistance to facilitate the transitional period.

Whittle is currently the lead outside director of Mountain Province, and has 25 years of senior executive experience in the mining industry. He has been a director of the company since 1997, and was President of Mountain Province’s joint venture partner, Glenmore Highlands Inc., at the time of the original discovery of Gahcho Kué’s 5034 kimberlite pipe in 1995. A Canadian Chartered Professional Accountant (CPA,CA), Whittle has extensive experience in corporate finance, transactional negotiation and structuring, and operational management, with a strong background in corporate governance.

The price achieved per carat in the eight months since commencing production ramp-up in August 2016 to completion of the third sale in March 2017 has disappointed: at US$72 per carat (US$77 per carat including specials) is well below the modelled value determined in the 2014 feasibility study of $123 per carat, and fell significantly short of the average appraised value of $184 per carat achieved through a series of bulk samples. At its first sale of rough diamonds in January, the company sold approximately 75% of the parcels offered, while the the balance, which represent smaller, predominantly brown and lower quality diamonds, were withdrawn due either to no bids being received or unacceptably low bids. This was principally a consequence of a decline in demand for smaller, lower quality diamonds, due in large part to liquidity restrictions caused by demonetization in India. That crisis having subsided, the diamonds sold should not be taken as representative of the longer term realized diamond price profile. At the time, Evans said, "The introduction to the market of first production from a new mine is a price discovery exercise with buyers naturally cautious. As our production volumes increase and the market becomes more familiar with our diamonds, we expect interest to grow." Mountain Province markets it stones in Antwerp.