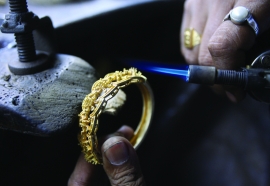 Much to the relief of the gold jewelry and diamond processing industry, the government has made some changes to the previously announced goods and services tax (GST) rate structure, slashing the applicable rate from 18% to 5% for certain categories of goods and services - and importantly, manufacturing - related to the gem and jewelry industry. The Council’s earlier decision of 18% was met with much discontent among jewelry manufacturers, who called it impractical and likely to cause immense job losses, as well as increasing the burden on the end consumer. The new tax kicks in from July 1. Currently there is no tax on jewelry making; the GST Council meeting held earlier this month had fixed GST on precious metals and diamonds, including jewelry, at 3%, while the tax on making charges was set at a much higher rate of 18%.

The tax on making charges would have in turn raised tax for consumers to over 4%, almost double of what was being currently charged in the form of 1% each on VAT and excise on jewelry. The government has also levied a 0.25% tax rate on imports of rough diamonds, which will be passed down each level to consolidators or companies that hire polishing firms, but there is an exemption from IGST for re-import of cut & polished diamonds (each of 0.25 ct or above) sent to specified testing agencies or labs abroad for testing by an exporter meeting the turnover criteria. Before the announcement, Anoop Mehta, president of the Bharat Diamond Bourse, said, "The government had promised taxes will remain around the existing levels under GST, but levies on rough stones and polishing services didn’t exist earlier. This goes against the whole idea of GST equivalence principle." He added, “When 95 percent of the entire business is exported, why is the government increasing the cost of production and taxing its own exports?”