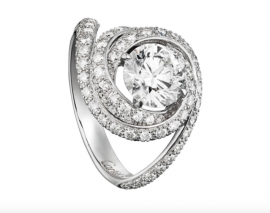 Ashley Davis of National Jeweler reports from JCK Las Vegas on the findings of a survey conducted by WeddingWire, an online wedding marketplace: essentially there seems to be a disconnect between the buyer and the receiver regarding the criteria modern couples use to shop for engagement rings. The proposer’s main concern is the quality of the stone, as the focus is on enduring value; the receiver valued the design and setting above all else, with quality and size ranking fifth and sixth respectively.

WeddingWire asked couples married in 2016 to rank different criteria in order of importance. As WeddingWire’s Associate Director of Creative Services Jaffra Trumpower explained, ring receivers were most concerned with the overall design and setting of the ring. The type of metal is even more important than the type of stone, while the cut of the stone was fourth on the list followed by quality. “Their last concern was, somewhat surprisingly, the size of the stone.”

The proposer however had a different criteria list, where quality of the stone was the most important concern of their engagement ring purchase. Trumpower explained that this was high on the list for the proposer due to him or her being educated by salespeople regarding the value of diamonds while ring shopping in-store. Metal was second, as it was for the receiver as well, followed by design and setting. Once again, type of stone was ranked lower followed by the stone’s cut. Diamonds, however, were the stone of choice for 73 percent of people polled. Nine percent preferred colored gemstones, followed closely by rough diamonds – a new trend –, which were preferred by 8 percent.

Proposers and receivers ranked size last out of all the criteria; however, that does not mean they necessarily wanted a small stone. The majority (49%) preferred a center stone that was between 1 and 2 carats, 28% said less than a carat and 23% said 2 carats and over. Diamonds, both round and brilliant cut, are still the most popular choice amongst the engagement ring shoppers. Those who are buying a ring, on average, look at rings 1 to 6 months prior to proposing; others were likely proposing with a family ring.

Consumers were heavily inspired by social media platforms like Pinterest and Instagram; most shared their engagement “just-said-yes” moments on social media. Due to the abundance of information regarding weddings, engagements and rings available online and on social media, couples said they felt overwhelmed and had a hard time making decisions. This underpinned a need for ultimately working with jewelers in-store when it came to engagement ring shopping, as human connection helped cancel out the digital-decision fatigue.