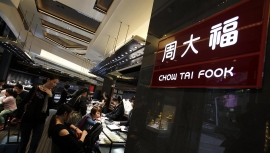 Hong-Kong based Chow Tai Fook jewelry Group, China's largest jeweler by market value, reports a 3.9% growth in net profit for the financial year which ended March 31, 2017, indicating a return to profit following a sales decline in Hong Kong and Macau, dating back to Q4 2014. The company told the media that although they had seen a stronger second half, a full-fledged recovery was still some time away.

Overall retail sales in Mainland China registered a fall of 7.9% compared with the steeper 11.8% drop in HK and Macau. While Hong Kong, Macau and other markets returned to a revenue growth of 0.8% during 2HFY2017, Mainland China recorded an even stronger rebound of 6.8% y-o-y. Mainland China accounts for over 60% of the total revenue. Gold products contributed more to revenue in FY2017, especially during 2HFY2017 when gold prices weakened, reaching a share of 60.1% in 2HFY2017. Sales of gem-set jewelry to overall revenue in 2HFY2017 decreased to 24%, the jeweler said in a statement.

Same Store Sales (SSS) in Mainland China and in Hong Kong and Macau recorded a decline of 5.2% and 12.4%, respectively. What is noticeable however is that SSS growth in both markets rebounded in 4QFY2017, the first time Hong Kong and Macau recorded a positive quarterly following 12 consecutive quarters of decline, while Mainland China rebounded to an 8.2% growth in 2HFY2017, compared with a 19.2% decline in 1HFY2017. The Group boasts an extensive retail network comprising over 2,300 points of sale (POS) of Chow Tai Fook and Hearts On Fire spanning more than 500 cities in Greater China, Singapore, Malaysia, Korea, Japan and the United States, as well as a fast growing e-tail network through operating its Chow Tai Fook e-shop and other e-tail accounts on major online shopping platforms.