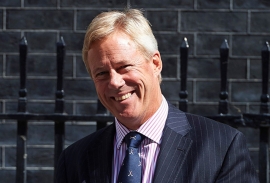 Diversified miner and 85% owner of De Beers, Anglo American, has appointed Stuart Chambers to succeed John Parker as the miner's next chairman and carry on with its overhaul, the company announced in a press release. Mr. Chambers does not bring mining experience to Anglo; rather he was Chairman of UK-based IT and IP (intellectual property) firm ARM Holdings and of multinational consumer packaging company Rexam plc (now Ball Corporation) until 2016. Mr Chambers will join the Board of Anglo American as a non-executive director and Chairman Designate on 1 September 2017 and will become Chairman on 1 November 2017. He succeeds Sir John Parker who announced in February 2017 his intention to step down during the course of the year, after serving eight years as Chairman.

In recent years, he has served as a non-executive director on the boards of Smiths Group plc and Tesco plc, amongst others, following an executive career at Nippon Sheet Glass (formerly Pilkington), Mars Corporation and Shell, where he began his career as a chemical engineer. According to Reuters, analysts said that the former chairman of ARM, regarded as Britain's most successful technology company, could prove a shrewd choice as Anglo American focuses on technological fixes to improve margins. They also noted Chambers' experience in handling big takeovers.

Last year shares in Anglo recovered strongly, leading gains by FTSE 100 index constituents with a 300% rise, having fallen by 75% in 2015. This year the recovery has stalled as the commodity price rally has faltered. Challenges for management also include a need to ascertain the intentions of Indian billionaire Anil Agarwal, the head of Indian miner Vedanta Resources who has bought a 2 billion-pound ($2.58 billion) stake in the company. So far Agarwal has said he views the stake as an investment by his family trust, not by Vedanta, and is not seeking to take control of the company. Reuters cites one senior industry source, who asked not to be named, as saying, "Anglo knows it has to change because it had a near-death experience," in reference to the 2015 price crash.

Mark Cutifani, Chief Executive of Anglo American, added: "I am looking forward to working with Stuart as we continue our rebuilding of Anglo American. Stuart has led and chaired major global businesses with many parallels to our organisation, in areas such as manufacturing process and technology led innovation. We have materially restored Anglo American's balance sheet and transformed the business performance over the last three years, and our task now is to unlock the very considerable value that we can see from our world-class asset base."