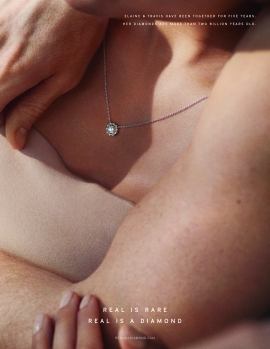 The Diamond Producers Association (DPA) on June 6 debuted at JCK Las Vegas a print, out-of-home, and digital display campaign extension, complementing the successful “Real Is Rare” TV and digital videos that were released in October 2016. Starting in July, the new ads will appear in weekly and monthly magazines across several verticals, including bridal, lifestyle, fashion, and entertainment. Brides, People, and Marie Claire are among the first print partners to be confirmed by DPA. The assets will be made available for jewelers and retailers to use in-store and in local media. “We chose to launch our new creative at JCK Las Vegas in order to share it first with our partners in the industry," says Deborah Marquardt, the DPA’s chief marketing officer explained. The ads feature couples' intimate moments, or as Marquardt explains, “The campaign features real couples, and the images show ‘stolen moments’ of tenderness where the diamond jewelry is treated as an unmistakable gift of love.”

The images of couples in intimate poses feature taglines such as (pictured), “Elaine & Travis have been together for five years. Her diamonds are more than two billion years old." Developed by Mother New York, and shot in New York City in March 2017, the five single-page ads are primarily focused on engagement and marriage diamond jewelry. They feature jewelry from suppliers, "including Gillian Conroy, Danhov, Greenwich Street Jewelers, Beverly K., Leo Schachter, and Pluczenik featuring Forevermark diamonds.” Marquardt also noted that, “The DPA plans to launch new video assets for linear and digital TV in Q4.”

Diamond Producers Association also announced earlier this week the release of their 2017 marketing budget of $57 Million, which will be used primarily to fund consumer advertising in the US and the expansion of the “Real Is Rare” campaign into India and China.