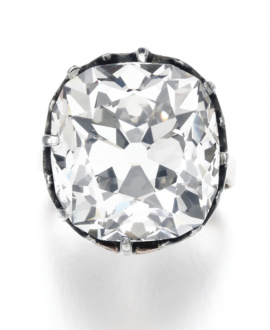 A ring that was originally purchased in the 1980s from a car boot sale for £10 ($13) under the assumption that it was a decorative costume jewel, today went under the hammer at Sotheby's Fine Jewels auction in London for $700,000 (£540,000), hammer price. It was only in the past few months that the owner decided to see if the ring had any value and asked Sotheby's to appraise it. Much to the owner's surprise, the ring turned out to be a genuine cushion-shaped diamond weighing 26.29 carats with an attractive color grade of I and impressive clarity grade of VVS2, dating from the 19th Century.

Thirty years ago, a woman in Isleworth, west London, bought the "exceptionally sized" ring at a car boot sale. The owner, unaware of its value, wore it for decades, while doing everything from the shopping to the chores. Speaking to the Evening Standard, Head of Sotheby's London jewelry department Jessica Wyndham called the ring a "one-off windfall, an amazing find." She says of the owners, "They'd been to quite a few car boot sales over the years. But they don't have any history of collecting antiques and they don't have any history of collecting diamonds. They came in with the idea that it might be real and they had no idea of its value," she said. "We had a look and said ...'I think that's a diamond and we got it tested at the Gemological Institute of America." She added: "The majority of us can't even begin to dream of owning a diamond that large."

Ms Wyndham said the owners, who do not want to be named, are "incredibly excited, anyone would be in this position, it's a life-changing amount of money." Because the older style of diamond cutting was "slightly duller and deeper than you would see in a modern style ... it could trick people into thinking it's not a genuine stone. With an old style of cutting, an antique cushion shape, the light doesn't reflect back as much as it would from a modern stone cutting. Cutters worked more with the natural shape of the crystal, to conserve as much weight of the crystal rather than make it as brilliant as possible."