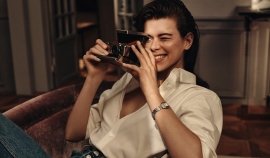 Luxury houses such as Cartier, Piaget and Chanel have launched collections on Net-a-Porter and are doing well, despite critics of the format. Cartier made a relatively risky move by placing Panthère de Cartier, a white gold diamond watch retailing for US$77,000 (HK$600,000) on the online platform Net-a-Porter. Within two weeks of the collection’s launch, the watch was sold. Of course some ‘purists’ believe that luxury products must be felt to create an emotional engagement, which is hard to replicate online. “For me, nothing can substitute that feeling when you touch a watch and when you feel it around your wrist,” says Wilhelm Schmid, CEO of A. Lange & Sohne.

Luxury watchmakers and jewelers realized that by being present not only on their own online stores, but also on multibrand e-commerce sites, enabled them to reach new customers and evolve with the growth of digital markets. Luxury giant Richemont is a prominent shareholder in the Yoox Net-a-Porter Group, which has brands such as IWC Schaffhausen and Piaget on its platform. “The result [of the collaboration] was beyond all our expectations,” says IWC Schaffhausen’s CEO Christoph Grainger-Herr. “Sales were coming in from all price points. It’s a very positive sign.” Montblanc went a step further by launching its first Google-supported smartwatch. The collection was sold exclusively on MR PORTER, the men’s e-store, for 2 weeks prior to its release in its own brick-and-mortar and e-stores.

Lisa Aiken, the e-commerce site’s retail fashion director, points out that the site’s unique clientele spending pattern ensured the sell-through rate for luxury watches and fine jewelry. “There’s an opportunity there that we weren’t capitalizing on.” Price resistance wasn’t the sole reason for luxury for brands to avoid embracing e-commerce sites; they also feared losing control of their branding. “Brands now have growing confidence to work with us,” Aiken says. “We collaborate with brands on the marketing and creative content to make sure that the products will be represented in a truly luxurious manner [online].” Sales aside, luxury watchmakers and jewelers are also increasing the channels of communication for their customers’ branding, such as social media and WhatsApp. LVMH’s first multi-brand e-commerce platform 24Sèvres.com is set to open later this month. The portfolio includes ‘first-tier luxury brands’ such as Dior and Louis Vuitton.