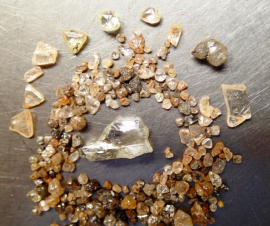 Stellar Diamonds plc, a diamond development company focused on West Africa, has entered into a conditional binding Term Sheet with BDG Capital Limited (“BDG”) in relation to the proposed sale of Stellar’s assets in the Republic of Guinea, the proceeds from which will be used to advance the development of Stellar's flagship Tongo-Tonguma mine development in Sierra Leone, "A project that has an estimated post-tax net present value of $104-million,”said Stellar CEO Karl Smithson. Stellar has received $250,000 as an exclusivity fee for a two-month period to allow BDG to conduct due diligence and completion of documentation. The conditional agreement includes certain plant and equipment, as well as the shares in subsidiary companies Ressources Tassiliman Baoulé, which holds 75% interest in the Baoulé project; Ressources Mandala Guinee; and West African Diamonds.

“The proposed disposal of our Guinea assets allows management to focus on the Tongo – Tonguma mine development in Sierra Leone. It also allows for BDG to take the projects forward, which is in the interests of Guinea and local stakeholders. We look forward to unlocking the significant value that we believe is inherent in the Tongo-Tonguma development as we advance the Company towards sustained commercial production.” Meanwhile, Stellar has also reported that it has exited its joint venture (JV) agreement with Citigate Commodities Trading.