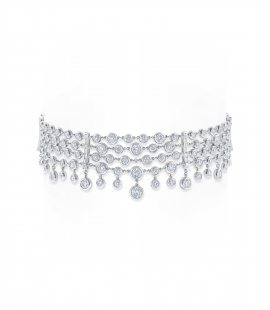 According to industry insight data published today by De Beers Group, "U.S. Diamond Jewelry Demand Hits US$41 Billion High", total diamond jewelry demand from US consumers increased 4.4 per cent in 2016 to exceed US$40 billion for the first time. While slower US GDP growth in the first quarter of 2017 is likely to have impacted diamond jewelry demand in the short term, the US has recorded five years of consecutive demand growth. US consumers now account for roughly half of all diamond jewellery purchases globally – a level not seen since before the financial crisis.

The media release reads: Although bridal diamond jewellery continues to be the foundation of demand in the US, more frequent acquisitions and a higher value of spend from single women helped drive demand. Meanwhile, self-purchase trends increased among both single and married women. Fifty-seven per cent of self-purchased diamond jewelry is acquired by married women, while a third is from Millennials. Retailers also reported high levels of consumer interest for multi-diamond pieces. The data showed that consumers are spending more per piece on diamond jewelry, with retailers reporting an increase in the $1,000 to $4,999 category. Globally, demand for diamond jewelry in 2016 increased marginally in US dollars (at actual exchange rates) to $80 billion, with demand growth from the US offsetting a contraction in India.

Highlights of the report on 2016 diamond jewelry demand and outlook for 2017 include:

Bruce Cleaver, CEO, De Beers Group, said: “American consumers continue to express strong desire for diamonds, but their purchasing habits are changing rapidly. While bridal diamond jewellery remains fundamental, we are seeing both single and married women buying for themselves more frequently and more purchases being made online. Meanwhile, products such as multi-diamond jewellery are becoming more popular. However, while US demand drove global growth in 2016, it is increasing demand from emerging markets that is behind the last five years being the strongest on record. Despite some markets facing challenging conditions last year, we see this trend continuing, with improvements in demand from China and India, in particular, emerging in 2017.”